Monument Circle, the center of Indianapolis. Don’t asl me why someone built a little house on one of those rooftops.

At 49 stories, Indianapolis’ Salesforce Tower is the tallest building in town. Once upon a time it was Chase Tower; the time before that, it was the Bank One Tower. I’m old enough to remember a time before it was added to our downtown skyline and made the formerly insultingly labeled “Naptown” feel all the smaller as we tried to catch up with fifteen or twenty other, larger cities nationwide. Measured by population we rank 16th; measured in skyscrapers, we earn a “Participant” ribbon. But we cherish our ribbon.

Longtime MCC readers may recall we’ve been in taller buildings — more famous ones such as One World Trade Center, Willis Tower, and 30 Rockefeller Plaza, which for some unsightly reason is now called the Comcast Building, which would be a terrible name for a sitcom. All of these pale before the magnificence of Pikes Peak, but that’s neither here nor there.

For Hoosiers, Salesforce Tower is as high as we can get without wings or catapults. A few weeks ago I had the privilege of attending a work-related function on their 48th floor. Of course I took photos of my surroundings. Prominent features are labeled where visible and remembered.

Our skyline may not be an iconic fixture in pop culture, but to us it’s home.

Indy toward the southwest. Beyond the once-five-star Conrad Hotel is the Hyatt Regency featuring a revolving restaurant. The dark roofs beyond that are the Indiana Convention Center, where we’ve been several times. Far back and center, the brown structure is Lucas Oil Stadium, home of the Indianapolis Colts.

Indy due west. Bank-owned skyscrapers are everywhere. Up front are Key Bank (inside Market Tower) and Lake City Bank (at 101 W. Ohio). The bluish monolith in the way, way back is a recently added 34-story Marriott that up close looks like a blast shield.

Indy to the northwest. Both banks are tiny compared to the OneAmerica Tower, Indy’s second-tallest skyscraper at 38 stories. At lower right, Fifth Third Bank in the Capital Center has maybe half its stature. 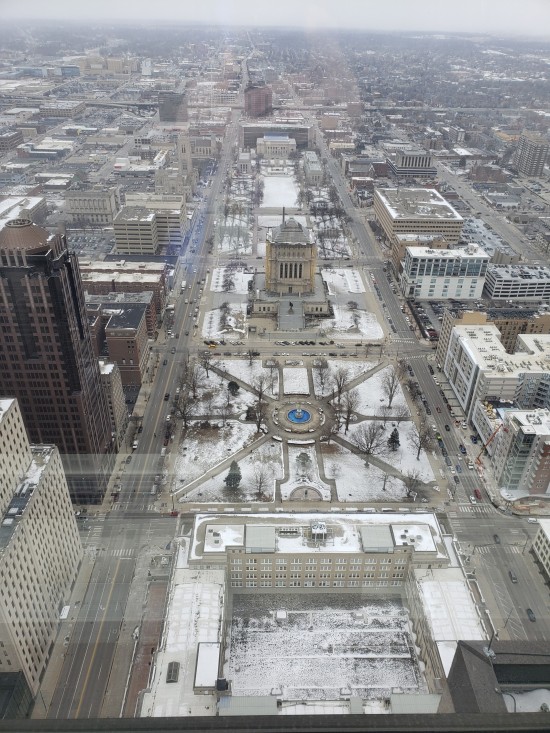 To the north stands American Legion Mall, along with our war memorial collection. Beyond all those is our largest public library.

The Regions Bank tower blots out the view to the northeast, which unfortunately includes the Murat Temple, one of our most ornate concert venues, renamed the Old National Building as a sad consequence of the power of banks. 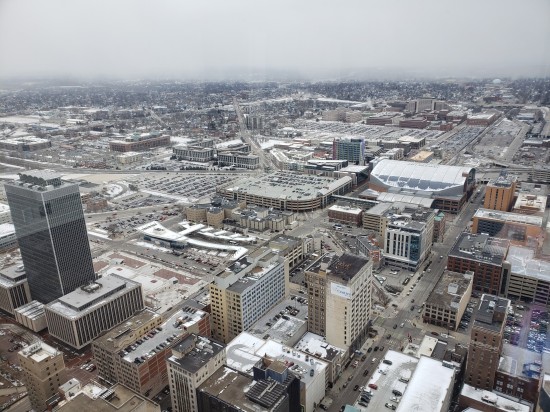 Wrapping up with the southwest view. Locals can pretend this is a Highlights for Children puzzle and have fun finding such places as Bankers Life Fieldhouse (home of our Indiana Pacers), the new Julia M. Carson Transit Center, the Eli Lilly campus (Big Pharma, major employer), the City-County Building, and maybe Fountain Square if you squint.

For value-added exterior context: Salesforce Tower itself, at sunrise the other day, looming high above all.

Full disclosure: I was there for a work-incentive soiree for doing a positive thing, although they never told me exactly what I did right. Other do-gooders attended for the party atmosphere. I, lousy at parties, came for sights and snacks.