The pathway to my precinct’s voting HQ, marked along the way by glimmers of hope and dread.

Today I performed my civic duty as an Indiana voter and participated in our May 3rd primaries despite the options. My wife and I have differing political philosophies, but we were unanimous in our non-enthusiasm for any of the four remaining contenders going into our less-than-super Tuesday. Once upon a time, my wife could walk into any election headquarters, throw the straight-ticket lever, and be out the door before they could finish peeling her “I VOTED!” sticker off its backing paper. Not so much anymore.

Indiana’s voting laws are flexible enough that it doesn’t matter which party you normally identify with — for primaries you simply tell them which party’s ballot you want to use, then you’re off and running. No proof of allegiance, no mandatory party registration, no pop quiz, nothing. Despite that flexibility, Anne and I each deliberated much longer than usual in choosing between the Reality Star, the Clinton dynasty, the Televangelist, and Old Man Cloud-Yeller. And this is just the primaries. We have a lot of thinking to do between now and actual Election Day in November.

But of all the messages I’ve been sifting through on social media tonight in between The Flash live-tweets, one will stick with me longer than any other.

The tweet that shall haunt me for days…or, depending on the November results, haunt me to my grave: 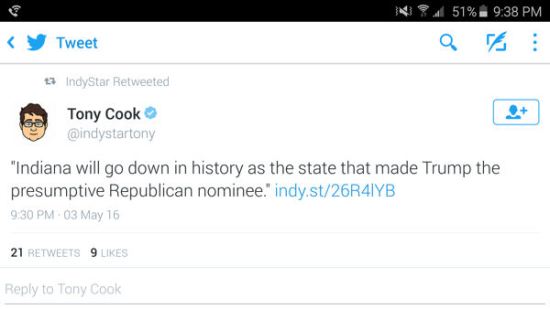 (Unrelated headline: Old Man Figures Out How to Do Screenshots After 2½ Years of Smartphone Ownership.)

Whether or not we thought Ted Cruz had a remote chance of luring Hoosiers into his grasp is now a moot debate. Nothing he tried worked for us — riding the coattails of American Ninja Warrior into town, eating a pastrami sandwich at Shapiro’s Deli, waiting till the eleventh hour to sharpen his Donald Trump heckling, forming a strategic alliance with the governor of our arch-nemesis Ohio, convincing the first female he could find outside his own family to sign on as his presumptuous running mate to garner the Republican feminist vote or, uh, something. He tried everything except appealing to anyone beyond his hardcore fan base and nothing worked. Go figure.

With Cruz throwing in the towel after our majority thumbs-down, Donald Trump is now the GOP’s man by default unless John Kasich can challenge him to an old-school Hamilton/Burr duel for nomination and satisfaction. In the meantime, Republicans tonight who previously endorsed Cruz or denounced Trump (e.g., Mike Pence, Ari Fleischer) are forced by lockstep clique loyalty to backpedal and quote-unquote “unify” the party behind a candidate they’ve been actively trying to oust ever since they realized he wasn’t One of Them. Then today happened and they’re left with no choice but to play along with him for now because they’re otherwise out of drastic nonviolent options.

Not that the Democratic action has been boring, what with Bernie Sanders handily winning our state and refusing to roll over and kiss Hillary’s phone. Now he can keep believing there’s still a chance that everything will be coming up Bernie just in time for the Democratic National Convention. Maybe if the U.S. adds twelve new states to our fifty-strong lineup before then, he can sway their newly American populations and/or their superdelegate trainees to his side. Guam, Cuba, Puerto Rico, and numerous as-yet-unmapped deserted islands should start steeling their answering machines for the tsunami of robo-calls heading their way shortly.

(Hopefully they’re better than the messages our landline has been receiving in the past two weeks. One guy sped through his spiel at the same BPM as the speedy-talky guy from the old FedEx commercials and was thoroughly unintelligible. Another was so amused by our machine’s greeting that he laughed through all his lines and hung up without naming the campaign website he was supposed to be plugging. Way to go, ace unpaid interns.)

Regardless of the nigh-inevitable results, I’m proud to say I did my part in voting, for what it’s worth. The Oval Office isn’t the only workspace up for grabs this year, as a few local offices including State Senate have some decisions to be made. The two of us are regular twice-yearly voters, not Christmas-‘n’-Easter voters who only show up once every four years. Even when the political spectrum disappoints the majority on a national and global scale, it’s easier for voters to make an impact on smaller elections ’round your hometown — councils, school boards, fourth-string offices, whatever. Strictly speaking, they need your vote much more than the larger-scale fatcats do. Granted, some of the little people may one day grow up to be fatcats themselves, but that’s angst for another year. One personal moral crisis at a time.

So. Here’s to the next six months of America desperately questing for anyone or anything except Trump to be President. Personally I can think of overseas royalty, fictional superheroes, and sandwich toppings I’d sooner vote into office than him. You bring the nominee, I’ll bring my voting power.

Unless your choice is sriracha. That stuff is the Trump of condiments.

If you love freebies but refused to vote in the primaries, you don’t get to be mad about all these stickers left unclaimed at the voting booth. Next time, get up and help us. You could at least try.