This is what Carrie Fisher did to me today.

The autograph line for Carrie Fisher at the second annual Indiana Comic Con had had issues all morning long. Some blame can be placed on the convention itself, but we’ll return to the subject of their culpability in an upcoming entry. From our vantage point, all we knew was that Fisher was half an hour late, and she seemed to be touching people’s heads. We couldn’t tell if she was rubbing them for luck, giving free temple massages, delivering phrenological prophecies, or autographing them.

We assumed the autograph process would otherwise proceed as normal. We bring stuff; she signs it; we watch actors at other booths while we’re waiting; everyone’s happy. Notice her next-door neighbor Jenna Coleman merrily rolling along.

As we approached, we learned what was happening. We also learned why Fisher had taken a twenty-five minute break in the middle of her signing. As each guest took their turn, Fisher adorned them with glitter — sprinkling a little on their hair, dabbing a spot on their forehead, maybe rubbing it into their brow or earlobes. At 12:05 she ran out of glitter and went on break so she could go fetch her makeup bag. She returned at 12:30 and, in lieu of glitter, applied her own makeup to each guest — mostly eyeliner, but also the occasional penciling on cheeks and such.

At 1:00 sharp a helpful gofer brought in a bag of several new bottles of glitter to her specifications. Her preferred ritual resumed on schedule. A dealer who’d brought eight or nine items to have autographed was the first to have his face dusted.

My wife, the lifelong major Star Was fan, was the one who wanted Fisher’s autograph. I like Star Wars stuff as much as the next average guy, but I was there to support her, to snap pics of the two of them if security allowed, and to see if the stories about Fisher’s occasional creativity and/or unpredictability were true. I wanted Anne to have a moment with someone she’s seen in action again and again since childhood, without me in the way. I stood back and watched while Fisher blessed my wife with a modest, restrained bespeckling. You could see a difference, but it seemed subtle and pretty.

Then the mad glitterer turned her attention to me. 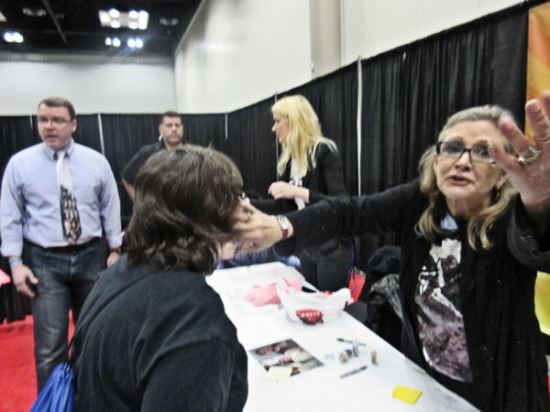 What was I supposed to do?

When Princess Leia issues a command, you obey. 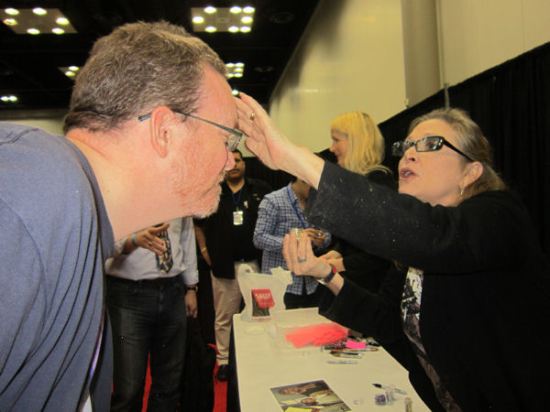 I closed my eyes, and the next sensation felt like someone slapped me in the face with a soft pillow, followed by some ruffling and rubbing. I opened my eyes and still couldn’t see because the left lens on my glasses was covered in glitter. We thanked her and exited past a long line of incredulous stares.

Anne took this pic while I was cleaning my glasses.

I had no idea how to react. I’d been tired and bitter after a 3½-hour autograph-line ordeal. On the other hand, this was the first time I’d ever been decorated by a celebrity. I shook my head and heard gasps and chuckles when a cloud of golden glitter billowed around me like a heavenly thunderhead. I rubbed some off around my eyes and mouth in case it was a toxic deathtrap. And then I let it ride for the rest of the day.

Word spread around the convention about Fisher’s peculiar gifting to her hundreds of lucky fans, but I never saw anyone else with a face quite as caked as mine. Several passersby who’d heard the stories saw me, smiled and said, “Carrie Fisher got you good, huh?” At least two of them made C3PO jokes. I told one I was leaving it untouched for a while as a sort of temporary trophy of the experience. He remarked, “Well, you look like a trophy now.” Points to that guy.

Some wanted to hear the story and struggled to understand why this happened. More than a few asked to take my photo. As a cosplay fan who’s never personally cosplayed outside Halloween, I can definitely say that’s a question I’ve never been asked before at a con. For all I know, pics of me may be out there labeled “Carrie Fisher Survivor” or somesuch. I haven’t looked yet. Maybe somewhere is another attendee who took an even stronger dose and spent the day looking like a Goldfinger victim.

A few young women told me my new coating should take days, possibly weeks to wear off. If that’s the case, I suspect Monday morning at the office should be quite interesting. If anyone hassles me over it, I’ll be sure to ask them for their scintillating celebrity makeover story.

[Alternate titles for this entry include “The Accidental Cosplayer” and “All That Glitters is Golden”. For MCC bookkeeping purposes this entry is Part Two of our four-part Indiana Comic Con 2015 photos. Part One covered our pleasant Friday experience; Part Three was nothing but costume pics, and Part Four was the full story of our experience waiting and living in Saturday lines. Thanks for reading!]

Leave a Reply to Randall A. Golden Cancel reply