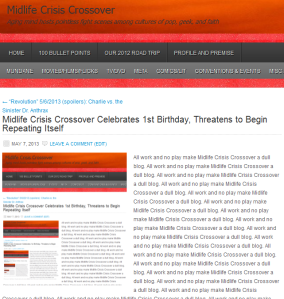 On April 28, 2013, the blog you’re presently skimming celebrated its very first birthday. Strange but true! I would’ve marked the occasion sooner and in a timelier fashion, but longtime readers might’ve noticed I had a hard time shutting up about that blasted C2E2 event for a few minutes. Even though our official six-part photo gallery is completed, I still have at least three posts’ worth of C2E2-related material in store from a different angle. Out of respect to my readers who might not be as enthralled as I am by local comics conventions, a broader, general-audience digression seemed in order. Also, I’d like to mark the occasion sometime before next New Year’s.

It was a singular event that inspired me to launch this humble site out of a combination of frustration and curiosity. (Expect the story behind said event in an upcoming entry. Enough time has passed, I think, that I can share it with fewer sour grapes.) I set forth on this strange journey to discover the answers to a long list of questions for myself, including but not limited to:

1. How many consecutive evenings in a row can I find a reason/excuse to write about something before I stumble and fail?
2. How much am I willing to sacrifice for the sake of writing?
3. Can I start such a project without a preexisting audience?
4. Is it possible to build an audience from the ground up? Not counting spammers?
5. What sorts of writing will I like best? And what kinds might become a dreary chore?
6. Is there a question #6?
7. Can I enjoy myself without being jealous of those who do this regularly for money?
8. Will anyone I know even care?
9. Am I alone in this?
10. Do I really like writing? If not, what am I supposed to be doing with my life?

Those answers, in order, up to this point in time:

1. Whoever had “354” in your office pool is the winner! And the lapse wasn’t even my fault. Partway through a cranky but hopeful entry about Man of Steel our Internet connection flatlined ’round midnight. (Fun trivia: the WordPress software flashes a sort of Red Alert when your ‘Net connection is abruptly severed while you’re writing. Lord bless them for that.) A quick call to our ISP’s automated hotline informed me that the repairs on their end had an estimated completion time of 4:15 a.m. I copied, pasted, and finished in Notepad; went to bed ’round 1; rose promptly if groggily at 6 a.m.; and published successfully.

If your office pool won’t declare a winner unless the lapse was my fault, then the answer was “364”. On the Saturday evening of C2E2, we departed from Chicago and arrived home in Indianapolis around 11 p.m. By the time I triaged our 240 photos down to a usable 80+, it was nearly 1 a.m., I was wasted, and not a word had been written. I surrendered. Then I overcompensated by posting twice on Sunday and twice again on Monday. To those who found the double dose of email notifications a nuisance, I promise such accelerated bursts won’t be a recurring feature.

2. Many hours of sleep, tons of reading time, maybe a few online acquaintances, and several online side interests that didn’t need to be part of my daily routine anyway. My wife insists I shouldn’t downplay this whole “sleep” thing, though.

3. Heck, anyone can start a blog without an audience. It goes without saying that those initial days of single-digit traffic are the most depressing. Worst of all is that moment when you realize you don’t have ten or more friends and loved ones demonstrably supporting your meaningful new endeavor every day. This is why complete strangers can be awesome — sometimes they’re a little more sympathetic and a lot less patronizing about the goals you want to achieve. Funny how that works.

4. With enough hard work, perseverance, stubbornness, topics to choose from, anecdotes stored up from four decades of life, writing stimuli, caffeine, research, self-awareness, WordPress support, and blind Internet luck…then, eventually, yes. Some days will still be quieter than others, but not all of them.

The official WordPress.com 1-year-anniversary badge. Collect them all!

5. Fiction is fun to write, but I can never find inspiration on my own. (My two previous attempts in the past year, while enjoyable exercises, were inspired by WordPress.com Daily Post prompts.) Movie reviews don’t stream from my fingertips as breezily as I’d hoped they would. The only forms of poetry I can handle writing are song parodies, humorous haiku, and the occasional limerick, which I’ve never tried here. Yet. I still loathe politics, and I find myself frequently blocked whenever I turn my attention to expressing my faith in my own words. Otherwise, random nonfiction commentary and the occasional personal anecdotes seem to flow more readily. And lists are definitely my thing.

6. There is never a Number Six. Stop asking.

7. When chatting with my wife about MCC, I refer to it as my part-time non-paying second job. For all the fun I have with it on my best days, I treat it as though it were a revenue generator, with all the diligence and responsibility inherent to such an employment model, even though in reality it’s more of a public hobby at best, if I want to be too humble and reductive about it. All the benefits of this odd experiment, writing outlet, demo reel, social playground, mixtape, and daily thought exhibition have thus far been intangible, but I refuse to compare myself to the big dogs out there, regardless of whether they’ve been doing it for years, or for only a few days but know all the right people. Jealousy is unbecoming and the future is as yet unwritten in my mind.

8. My wife still thinks I’m cool. As for those folks I knew before I launched MCC…well, I can hear a few of them breathing every now and then. I won’t lie: some days I want to remove longtime acquaintances from our Christmas card list and replace them with some of the overseas spammers with 35-letter scrambled usernames who “Follow” MCC for poorly rationalized marketing purposes. Most days, though, I’m sanguine enough to understand why not everyone who knows me from The Time Before MCC is following along. Besides all the relatives I’ve never told about this place, I mean.

9. Delightfully, no, I’m not. Midlife Crisis Crossover owes extra-special thanks to its longtime supporters, fellow WordPress clients and non-blogging ‘Net-users alike. If you don’t know who you are, ask me and I’ll say yes. Yes, you are wonderful people, indeed.

Question 10B will surely continue to perplex and haunt me as we continue headlong into Year Two. I promise I’m not taking this moment to announce that I’m downshifting to posting just once per week, though the physical toll of the nightly toil tells me that I may need to ask permission for a night off from time to time. I certainly have no plans to vacate the premises anytime soon, though. Entire worlds’ worth of topics remain as yet unexplored, sights as yet unseen, thoughts as yet unprovoked, our 2013 Road Trip in the planning stages, some ideas not yet tested, and jokes not yet run into the ground. I also have more questions to answer for myself in the months ahead, including but not limited to:

11. Will there ever be an official MCC logo?
12. Can I take a day or two off each week without panicking about my stats?
13. Did I use up all my best ideas in year 1?
14. Will that “faith” part of the MCC mission statement ever stop being overshadowed by all the other parts?
15. Can the Freshly Pressed fairy strike a completely unfair third time?
16. If there’s no Number Six, how about a Number Sixteen?
17. Will I ever discover an idea worth exploring at book length?

Are there more questions I should be asking myself? What do you, the Viewers at Home, think?

As always, thanks very much for reading and supporting. Hopefully the best is yet to come!

(If it’s not and I’ve jumped the shark without realizing it, I apologize in advance. If it helps, I’ll throw in more haiku.)