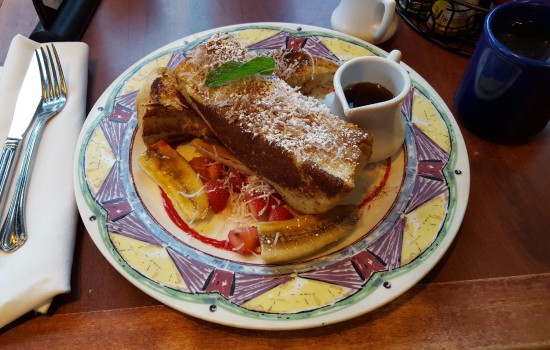 My best breakfast of the week: coconut creme stuffed French toast. As Seen on TV!

In our early road-tripping years, we couldn’t afford food-based tourism. We ate whatever we could find within range of the sights or near the hotel, whatever wouldn’t destroy our budget. I used to plan our hotel reservations around which chains offered free breakfast. It didn’t take long to get tired of weeks-old, shrink-wrapped, itty-bitty pastries. We’re used to having at least one McDonald’s stop per year — usually as our last meal before we arrive back home — but can’t handle seven straight days of it. Longtime MCC readers may recall we ate Subway so many times that I eventually declared it my mortal enemy.

Now that we’re older and in a somewhat stabler position, occasionally we can stretch our legs and try places we don’t have in Indiana, and dabble in pricing above fast-food levels. On the morning of Day 3 we decided to take a deep dive into Google Maps and see what breakfast we could find in the immediate Baltimore area besides the Hyatt buffet. That trail led us a few blocks northeast to the comfort of Miss Shirley’s Cafe.

END_OF_DOCUMENT_TOKEN_TO_BE_REPLACED

This week my wife and I have been taking advantage of our hotel’s complimentary breakfasts to save as much money as possible (their modest, cook-to-order omelet bar is a nice touch), but sometimes a guy needs a change of pace. For lunch today I drove an hour north to check out the Denver Biscuit Company, part of a restaurant triumvirate that was featured in a 2013 episode of Guy Fieri’s Diners, Drive-Ins & Dives. That’s not a show we usually consult for travel reference (thanks to a 2012 disappointment in Topeka), but this particular joint had other incentives to lure me away from Colorado Springs.

Pictured above is the Dahlia — sausage, egg over-easy, apple butter, and maple syrup on “biscuit French toast”. It’s one of several creative biscuit sandwiches they serve for breakfast and lunch. For that “Triple-D” episode the esteemed Mr. Fieri sampled their “Elmer”, topped with pulled pork, barbecue sauce, coleslaw, onions, and homemade pickles. For him I imagine it was the only logical option. But I’m a big fan of imaginative breakfasts and knew I had to try it once I confirmed it was real.

The other incentive for my mini-road trip was an invitation from an old friend.

END_OF_DOCUMENT_TOKEN_TO_BE_REPLACED

Ye olde, venerable International House of Pancakes may be a chain restaurant, but they’re not known for dullness or restraint. You can order pancakes as your primary meal, as befitting their moniker. If you’d rather have an omelet, you’re entitled to a side order of toast, biscuits, or the same pancakes. The strawberry banana pancakes in the above photo were given to me as the sidekick to my omelet. That would be great if I were someone likely to burn thousands of calories over the next few hours, such as an Olympic pentathlete or The Rock before his first three morning workouts.

END_OF_DOCUMENT_TOKEN_TO_BE_REPLACED

The monstrous “Amish donut” was offered for breakfast at the 2014 Indiana State Fair. It had enough calories to power you through a month of Olympic events, or you could use it as a spare golf cart tire.

It’s that time of year again! This coming Friday, June 5th, will be National Donut Day, the greatest non-federal holiday that Hallmark wishes they had invented. Imagine an entire line of National Donut Day greeting cards, with a saccharine message inside and an edible sugary breading on the outside. If Hallmark could spin it expertly enough, they could rake in billions and afford to ditch some of their fake calendar-padding celebrations.

END_OF_DOCUMENT_TOKEN_TO_BE_REPLACED 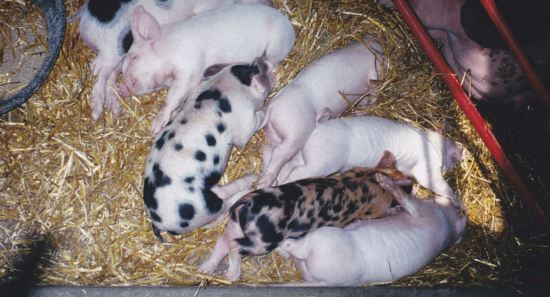 Outtake #1 of 5: baby piggies napping at the Minnesota Zoo. When we arrived home late at the end of our drive, this is how peacefully we slept that night.

[The very special miniseries concludes! See Part One for the official intro and context to this MCC remastered edition.

Fun trivia: the original 2006 version of this entry was posted entirely without visuals because neither of us took a single photo on Day 7. As a special bonus to break up the monotony for today’s readers, especially for anyone who craves photos but couldn’t care less about my writing, this evening my wife and I delved into the deep end of our closet and disinterred the rest of her 35mm hard-copy photos from 2006. Previous entries used a combination of excerpts from her scrapbooks and saved files from my first year as a digital camera owner. The five unrelated photos seen here, each of which reference activities from previous chapters, have never been scanned or shared online until now. Nothing fancy or disappointing about them; we basically forgot they existed.]