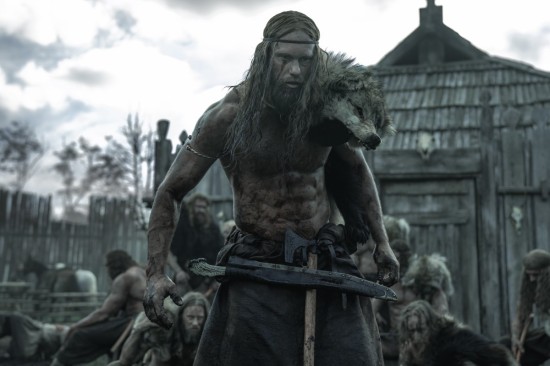 “My name is Amleth War-Raven. You killed my father. Prepare to die.”

It’s just the Dolby Cinema sensory overload talking (ten days later, even), but my favorite thing about The Northman is it may be the closest I ever get to Skyrim: The Motion Picture. Granted, in his painstaking simulation of a savage tenth-century Scandinavia, co-writer/director Robert Eggers has omitted dragons, magic, nonhuman races, skill leveling, heavy armor, and evil demon gods. Such is the movie biz, where compromise is inevitable and was definitely not a Viking invention.

With no gaming consoles to call their own, film critics mostly dwelt on its commonalities with Hamlet, which isn’t a shocking revelation considering they’re both based on the same historical figure, the legendary Jutland prince Amleth. You’ll note Shakespeare staked his own IP claim with a cheaply anagrammed name (well, more like a child’s one-step skip cipher), while Eggers and co-writer Sjón (last year’s Lamb) realized “Amleth” is no longer trademarked and the long-long-dead cannot sue. Of course they undergo the same setup: in A.D. 895 Young Amleth (Oscar Novak, who was also Young Bruce Wayne in The Batman) watches helplessly as his father the king (Ethan Hawke, having a grimdark year between this, Moon Knight and The Black Phone) is slain by the forces of his own uncle Fjolnir (Claes Bang, a.k.a. Steven Moffat’s Dracula), who then accosts his mom (Nicole Kidman) and usurps the throne. Fjolnir does love it when a plan comes together.

Whereas Hamlet is permitted to stick around and express his grief through navel-gazing speeches that he probably practiced on his stuffed animals for months before trying them out on his friends, Amleth flees the kingdom, somehow survives a decade or so of offscreen runaway urchin horror, and winds up a slave in Rus (guess what they’re called today!) before he at long last returns home to avenge his dad and rescue his mom. The long and agonizing road has transformed him into Alexander Skarsgård, who is in every imaginable sense the dire opposite of the comparatively softball Skarsgård we last saw in Godzilla vs. Kong. Amleth the man may be bound to masters at first, but they and his extreme hard-knock life turned him into a grungy, sinewy killing machine, a feral super-grunt whose sole diet is chugging energy drinks made entirely from testosterone, blood, and whole ghost peppers. He is beyond fierce, nightmarish to behold on the big screen. And he isn’t a good guy. At all. You don’t hang out with fellow Vikings and simply opt out of the looting, pillaging, ransacking, and murdering. To him those weren’t merely “following orders”. They were revenge practice on living tackle dummies.

As we follow Almeth’s return journey and its improvised scheme, when he finagles himself a slave trade onto Fjolnir’s staff, the Skyrim resemblances pile ever higher. There’s the violent regime change at the heart of it all; the proto-brutalist architecture of their dwellings; the foreboding faraway mountains and the sometimes steaming environment (think Eastmarch); a side quest for a special sword guarded by the undead; a follower (Anya Taylor-Joy) with a useful skill set or two; an ambiguous prophecy that defines where the protagonist’s arc will land; a pseudonymous Valhalla; macho shouts that can devastate listeners at ground zero; and a soundtrack rife with gloriously storming war drums and hairy throat-singers shaking pole-axes at each other in the recording booth as they bellow until the subwoofer cracks down the middle. (I’m listening to the soundtrack as I write this, and I lament that I must resort to using a meager desktop PC and headphones, rather than a 100-pound boombox on my shoulder.) Also, if you look closely at a main character in one scene I’m pretty sure we — or rather they — get an arrow in the knee. Among other skewered parts.

But The Northman is no video game, nor is it a basic revenge thriller, no unplugged Death Wish Goes to Iceland. It’s all about the immersive experience — not just the intimidating A/V aspects, but the historical recreation as well. Eggers staked out his obsessively time-machined folk-horror niche with The Witch and The Lighthouse, unsubtle declarations that this man will never, ever helm a cutesy present-day California rom-com with any Disney Channel veterans. His faithful resurrections of oddly specific yesteryears rarely if ever invite comparisons to cinematic ancestors because no one else could possibly convince a studio to fund such exotically mad excursions. The only concession to necktie-wearing producers that I can detect is, well, all that English dialogue. I expected Eggers to have the entire cast trained in Jutlandic tongues, but alas, only a few token subtitled sequences made it in.

The results aren’t exactly pretty or comfy, apropos of the situation and its merciless environs. I haven’t watched nearly enough Skarsgård works to draw comparisons within his own resume, but he’s overwhelming as a relentless berserker who, with the assistance of Taylor-Joy’s complicated Olga, finds exactly one (1) outlet for a few non-furious sensations, among the few bits of relief we feel between moments of butchery. With her help, his plan incorporates some slightly less confrontational steps and patiently builds to the culmination of his life’s work, which hits a brick wall at a morally murky crossroads, where his allegiance to his family and to his bloodthirsty quest are mightily tested. At that point Kidman stops lurking in the shadows as a seemingly quiet MacGuffin and emerges in her own time as an unreckoned force that may take you aback if you’ve seen her stiffly mannered, overplayed AMC ad eighty-six times against your will and forgot the extent of her talent, you distracted fool.

The Northman is at times cruel and its barbaric drum corps threatens to force-grow new chest hairs while you watch and listen in stunned terror, but Eggers fans will once again dig his cinematic deep-diving even if they can guess how well it ends for Our Antihero based on his last two films. But if you scrape through the grime and guts, you can glimpse some light subversion of all the hyper-manly chest-thumping, which cannot and should not end with an easy “okay, what’s next?” summons for cheap sequels, any more than modern-day real-life war-drummed conqueror fantasies ever should. Leave that hateful intensity out of civilized life and save it for your next Skyrim getaway.

Hey, look, it’s that one actor!: Willem Dafoe is distressingly underutilized as the king’s court jester and master of manhood ceremonies. Björk appears to provide her own wardrobe in two scenes as a creepy seeress. Other court employees include Ingvar Eggert Sigurðsson, who I didn’t see as a bounty hunter in Fantastic Beasts: The Crimes of Grindelwald because I’m holding off on watching that series until I get the sense that it matters.

Ralph Ineson, Taylor-Joy’s dad from The Witch, has one scene as a sea captain. Her Witch mom Kate Dickie (also in last year’s The Green Knight) is in there somewhere as well, but I missed her.

How about those end credits? No, there’s no scene after The Northman end credits, but they’re accompanied by more volume-11 drumming. Good enough for me.