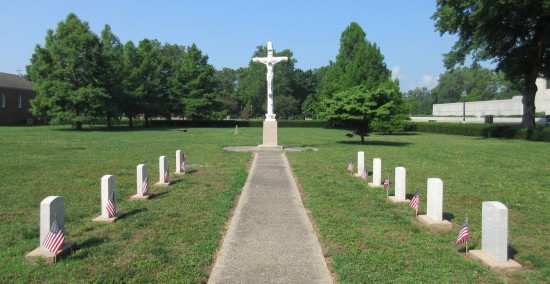 This statue of Christ on a cross with its own runway is actually part of a cemetery.

One of our biggest regrets about our annual road trips is we always fail to make time for church services on Sunday. Occasionally we’ll happen near a church that’s built up enough exterior decor that it counts as a tourist attraction, but we’re never in a position to attend services. We’ve visited such houses of worships in New Orleans, Colorado Springs, and New York City, among others.

So it went in Vincennes as our walk took us slightly adjacent to George Rogers Clark National Historical Park, where we found holy grounds whose history predates Clark’s arrival in the area, not to mention the American Revolution itself. It was a Tuesday and we aren’t Catholic, but we appreciated a chance to spend a few minutes with our minds pointed more toward God.

Our first visual hint that we were somewhere uncommon. Basilicas tend to be frowned upon by the average HOA covenant.

We had no idea anything of significance stood next door to Clark’s park until we arrived on site and hurriedly searched for the Visitor Center and its bathrooms, in either order. Standing between us and our goal was the Basilica of St. Francis Xavier and Old Cathedral Catholic Church. St. Francis Xavier Parish dates its earliest beginnings back to 1734 when it was just a cabin and a handful of French believers. The present-day church building has stood since 1826 and presides over the oldest Catholic parish in Indiana. In case of visitors to Vincennes, they keep a few eye-catching items of note outside. 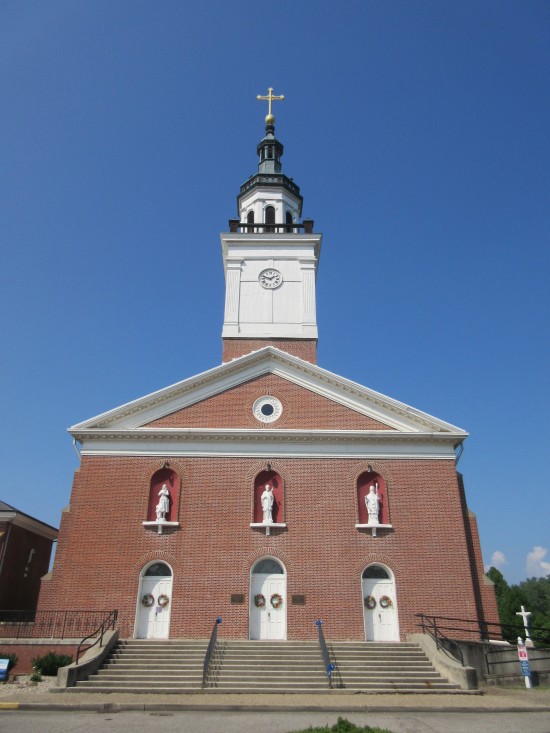 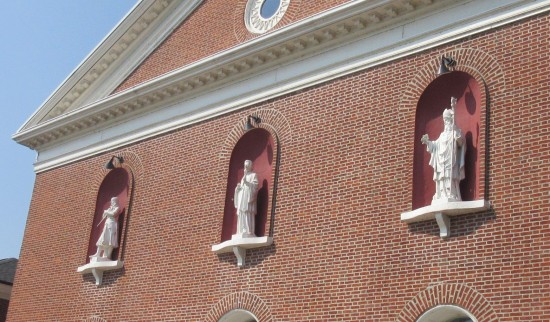 Out front is a statue of Pierre Gibault, Vicar-General of the Illinois Country (per its inscription) who helped convinced the locals to take Clark’s side in the fight against the British.

On the same grounds is the Old Cathedral French & Indian Cemetery, comprising 4000 mostly unmarked graves for 18th-century Vincennes residents, many of whom fought for the new America. Fort Sackville’s surrender was negotiated hereabouts.

The few markers honoring the dead include the arrangement in our lead photo, and this one for Joseph Bowman, Colonel Clark’s second-in-command.

The lead photo’s centerpiece is the tombstone of Reverend Jean Francois Rivet, a missionary from Martinique who, according to said tombstone, would become “Indiana’s first public school teacher.” 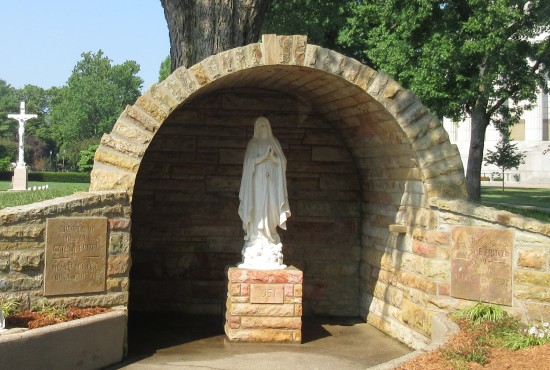 Mary gets her own shelter off to the side.