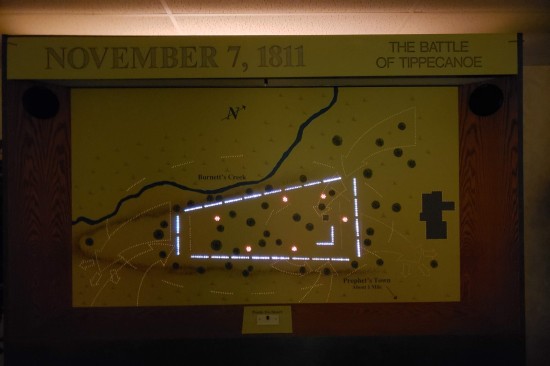 How we used to make lit-up battle simulators in the days before computers.

In addition to our annual road trips, my wife Anne and I have a twice-yearly tradition of spending our respective birthdays together traveling to some new place or attraction as a one-day road trip — partly as an excuse to spend time together on those most wondrous days, partly to explore areas of Indiana we’ve never experienced before. We’re the Goldens. It’s who we are and what we do.

Once upon a time in 2019 Anne decide she wanted to celebrate her birthday with a jaunt around the city of Lafayette, an hour northwest of our Indiana home. She cobbled together a short to-do list of things she wanted to see, not lengthy but enough for a leisurely afternoon — a bit of Indiana history, a bit of downtown tourism, and a bit of healthy walking…

On some of our past road trips we’ve visited battlefields at Antietam, Gettysburg, Saratoga Springs, and Chattanooga. The farther east we drive, the more battlefields become a tourist attraction, tragic parts of our nation’s history commemorated either with small markers or with full-fledged parks, depending on the enthusiasm of their local historical societies and the performance of their fundraisers.

Indiana doesn’t have quite the same wartime history as, say, Virginia or New York or Pennsylvania. Back in the early days when we still had land wars on American soil (or future American soil, as it were), not many armies wanted to march or drive out this far just to pick fights with large gatherings of opponents en masse. This was centuries before our vast highway system was invented to enable racist posses, drive-by shootings, interstate serial killers, and the occasional militia.

Indiana has one (1) Civil War battlefield down near Kentucky. We also have a handful of markers noting minor battlefields here and there, many of which involved assorted tribes who were there first, and a disproportionate number of which also involved William Henry Harrison. One of them has a museum.

Dating back to the 1830s, this building was once a school and a seminary.

Down the road from the city of Lafayette was our next stop, the Tippecanoe Battlefield Museum. On November 7, 1811, when future short-term President Harrison led an army against a confederation of tribes led by Tecumseh of the Shawnee and the adviser Tenskwatawa, alias “the Prophet”. The tribes weren’t thrilled with the pervasive intruders, the incoming settlers had reason to believe they weren’t safe, and it didn’t help that our old arch-nemesis England was taking steps to ratchet up the tension shortly before things escalated into the War of 1812. Harrison led a thousand men into two hours of combat against several hundred Native Americans. The latter retreated after dozens of casualties were incurred on each side. The following day, Harrison led his men to Prophetstown, where their opponents had been living but fled. On orders from Harrison, Prophetstown was burned to the ground, and the former residents’ supplies either appropriated or destroyed.

Harrison was pretty proud. He came away with the new nickname “Tippecanoe”, after one of the rivers near the battlefield. (Similarly, the entire area, comprising Lafayette and other towns, is Tippecanoe County today.) Harrison would go on to become the first president of the Indiana Territories, governor of the State of Indiana, and later President of the United States for thirty-two days. For both his 1836 and 1840 Presidential campaigns he held rallies on those very grounds. The battlefield was named a National Historic Landmark In October 1960, which would’ve been on Dwight Eisenhower’s watch. And there it stands to this day, maintained by the local historical association.

Harrison: the man, the myth, the guy who should’ve dressed more warmly for his wintertime inauguration.

To an extent, the place reminded me of two episodes of Parks and Rec. One of my favorites is season 3’s “Harvest Festival, in which Leslie Knope has to negotiate with the Wamapoke Indians, whose history with the townspeople of Pawnee was severely bloody…

…and season 7’s “William Henry Harrison”, in which Leslie, Andy and April visit a museum that devotes itself to Harrison’s life but struggles to make relevant use of all its exhibit space. (Though the show fictionalizes its contents, Indiana does have a Harrison Mansion and Museum up north in Vincennes. We’ve not visited it yet, but we’ve been to his gravesite in Ohio.)

One of many alt-history headlines in the faked TV-comedy museum’s exhibit called “If Harrison Had Worn a Coat”.

We didn’t visit the place in joyous celebration of what happened two centuries ago. Not every historical site is necessarily about patriotic cheering. Anne knows her history well enough to have key context firmly in mind when we approach such places. We’re curious to see where History with a capital H happened, for better or worse. If we spot differences between the curators’ portrayal and what we know going into it, it’s noted and logged.

Introductory plaque for newcomers to the Battle of Tippecanoe. 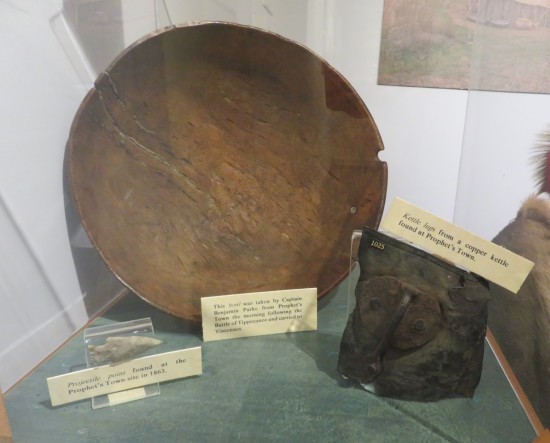 Tribal artifacts from the time.

Reenactment of life for the Shawnee in Prophetstown.

Assortment of blades, beyond the usual arrowheads and knives.

Meanwhile on the other side, there’s the U.S. musket Model 1795 with bayonet, the first weapon produced at a U.S. armory.

Among the more peaceful gear is a surveyor’s compass. 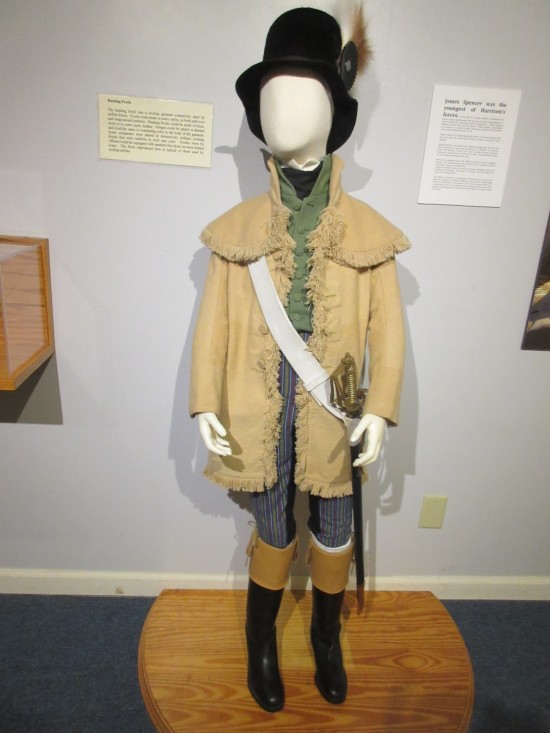 A hunting frock, a common fashion option for off-duty soldiers.

Tracing the evolution of “Tippecanoe”.

Another visual representation of the battlefield layout.

Mandatory cannon. Every museum about wars has one.

Music and lyrics for Harrison’s 1840 campaign theme “Tippecanoe and Tyler Too”, costarring his running mate John Tyler of Virginia. 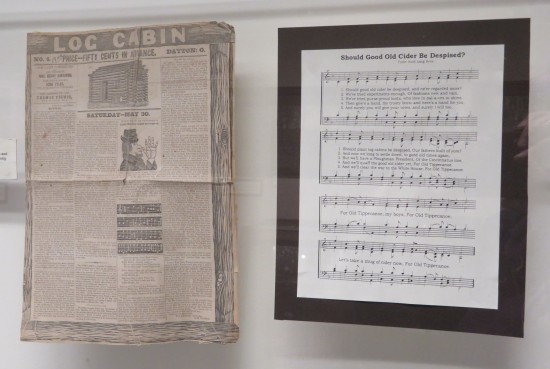 Other antiquities of the day include the hit single “Should Good Old Cider Be Despised?” and an ad for log cabins at fifty cents apiece.

We didn’t buy anything from the gift shop, but kids tired from the long drive can buy snacks such as this candy shaped like musket cartridges, for the low price of three old-timey log cabins.

On the other side of the parking lot is the actual Tippecanoe Battlefield itself.

The most prominent battlefield feature is an 80-foot obelisk commissioned by the Indiana General Assembly in 1908. Engraved on the sides are the names of the white guys who died that day. 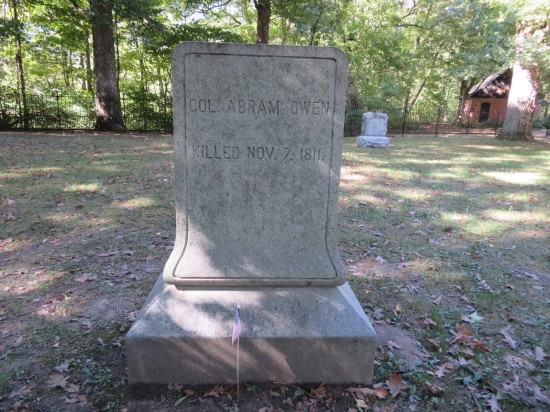 A select number of headstones note the higher-ranking officers who fell in battle.

A somewhat more recent marker for one of the fallen. 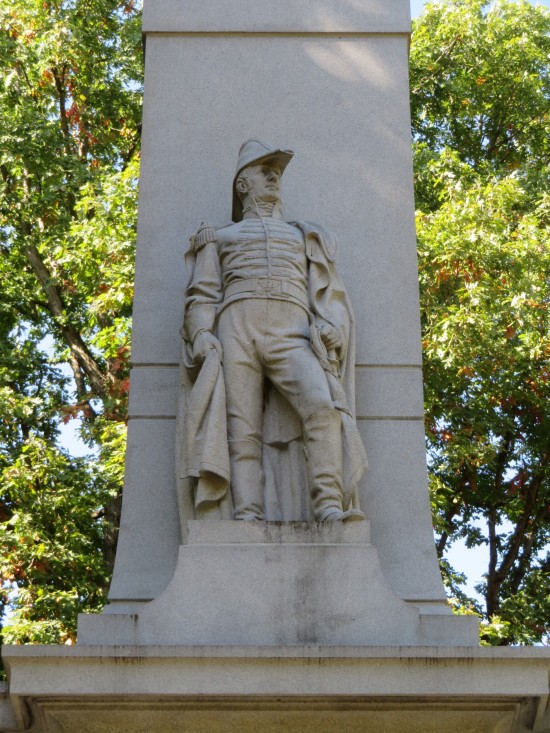 Yes, the monument does indeed include a William Henry Harrison statue, a true rarity in the historical sightseeing world compared to the many, many, many Washington statues out there.

To be continued! Other chapters in this MCC miniseries:

Part 1: The Astronaut Alumnus
Part 2: The Works on the Walls
Part 3: Drifting Around Downtown
Part 5: Prophets and Poultry
Part 6: The Birthday Menu