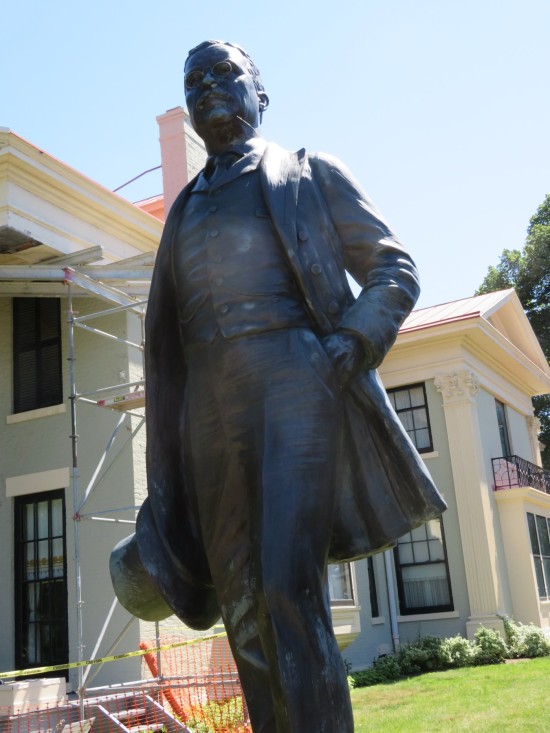 Longtime MCC readers are well aware we sometimes fall short of our goals. Sometimes we don’t have time to fit in every possibility we brainstormed for our to-do list. Other times, circumstances block a seemingly simple objective. We’ve had our moments of overcoming obstacles and persevering anyway. We’ve also had those times when we cut our losses and decided the hassle outweighed the potential heroism.

We missed two key items while we were in Buffalo. One could’ve been accommodated if we’d been willing to dawdle more in Buffalo and sacrifice later parts of our itinerary. The other, which according to our research should’ve been an easy click-‘n’-run, threw us a disadvantage with a kind of barrier we hadn’t expected: a surprise street party.

Continuing the theme of Presidential tourism, albeit a bit off the “burial site” track, Anne wanted to take a quick gander at the Theodore Roosevelt Inaugural National Historic Site. In September 1901, President William McKinley was struck down by an assassin while attending the Pan-American Exposition (read: World’s Fair) in Buffalo. Though he seemed to recover at first, as his condition worsened, Vice President Teddy “Man’s Man” Roosevelt abruptly ended his vacation in Vermont and headed to Buffalo. He was 300 miles away when McKinley died, but upon his arrival was rushed through an inaugural ceremony, felt the best thing to do by all involved.

The ceremony was held at this building, which was built in 1839 as an officers’ barracks for a military outpost whose job was to stand guard in case of Canadian invasion. By 1845 that job was deemed pointless and it became a private residence, which it still was as of 1901. It’s been the Historic Site since 1966. 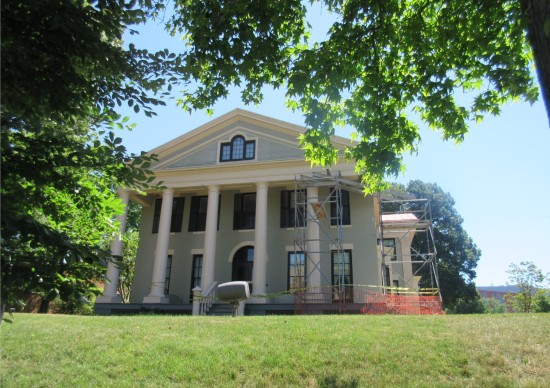 I skipped the interim part when it was a restaurant for thirty years. I’m sure they made it work.

Out front, a statue of President Roosevelt #1 welcomes visitors a few feet above street level on a raised lawn.

We knew this stop had a drawback. We arrived around noon. The visitor center didn’t open till 12:30 on Sundays. Under normal circumstances that would be an easy wait, but we still had hours of driving ahead of us and the day was already halfway over. Anne was satisfied with scoping out the exterior and moving on, on the condition that this cursory approach didn’t become the norm at every stop.

We appreciated the kind wishes, but all things considered, the “welcome” came off a bit muted.

We continued south toward downtown with the intent to scope out a related feature — Buffalo’s own McKinley Monument, a 96-foot obelisk erected in front of City Hall in 1907 in his honor. We planned to find a quick parking spot, approach, photograph, ponder, and split. We were surprised to find multiple streets barricaded and parking spaces increasingly filled up as we approached. 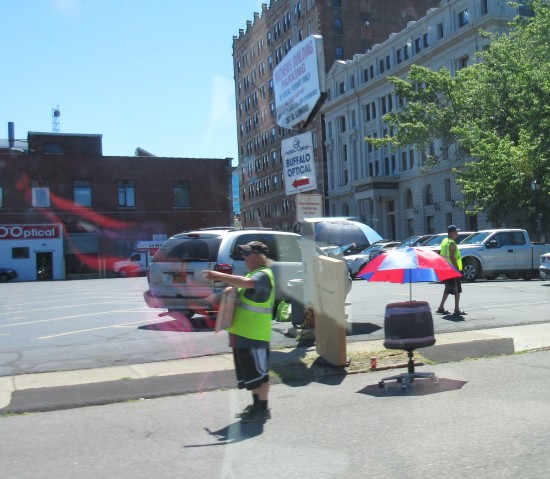 We’d popped a quarter in a meter to brake for the Roosevelt statue. A couple hundred feet farther, guys with cardboard parking-pricing signs took over the cityscape.

A few signs told us what we didn’t know: this was the weekend of their annual Taste of Buffalo food festival. A bevy of restaurants, chefs, and vendors converge on the scene and everyone has fun eating and socializing and then eating some more. We learned after the fact an actual Iron Chef (who’d also competed on our beloved Chopped) would be on hand to envliven the festivities as well. If we’d known in advance and had an extra half-day to spend in Buffalo, that could’ve been awesome.

But we didn’t. We just wanted a peek at the one big white rock pointer. The more we drove, the denser the cars became and the more twisty their road closures grew. We could eyeball the monument from blocks away, but every turn we took got us nowhere near it. Anne gave up trying to snap a pic from her side while we were in motion. I did what I could while slow-rolling through the congested traffic. 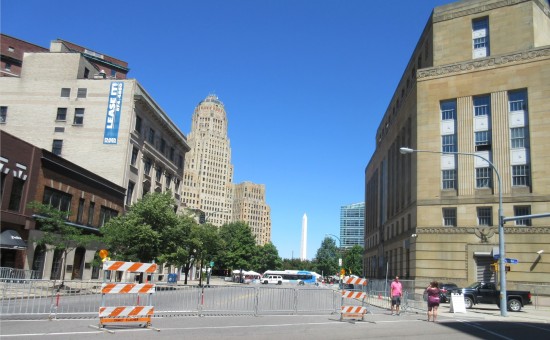 Our first sighting of the monument, to the east of us. The older building on its left is City Hall.

We circled around to its eastern face and…nope, no good. 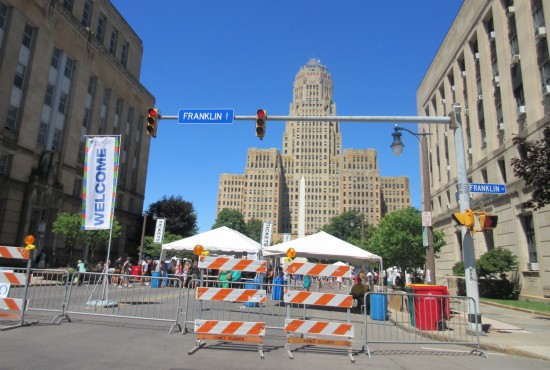 This was the closest we ever got. It’s a decent shot of City Hall, but we once again found ourselves stung by an ironic WELCOME sign.

After a full lap around downtown, we conceded defeat and agreed we weren’t interested in paying seven to ten dollars to park for one minute of monument. We moved on toward another area of Buffalo, away from the crowds and near another bit of history. That’s the nice thing about the older U.S. states for history buffs — stand in place, spin around, and wherever you stop, somewhere nearby is probably more American history to go seek and learn.