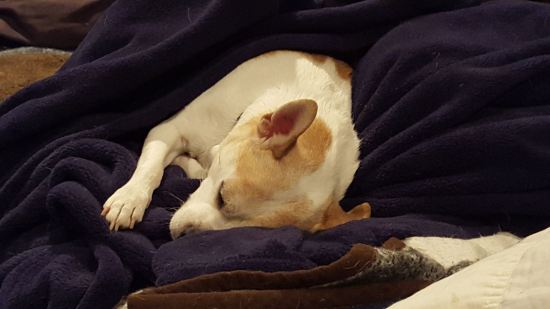 I took a four-day staycation the week before Thanksgiving, but any therapeutic benefits were nullified days ago by the nonstop holiday weekend, the long work week that followed, and the little family dramas encroaching on various fronts. I’m under orders from my wife to get some rest this weekend after three straight nights of failing at proper sleep. Our dog Lucky, the master of power naps in our household, makes relaxation look sooooo simple.

His lifestyle is largely carefree except when neighbors, joggers, random animals, or imaginary monsters come within 100 yards of our backyard and have to be threatened away with his defensive yelping.

He never has to worry about finances because, whatever happens with his humans, the dog-food service always runs on time and sometimes throws in yummy heartworm pills as a bonus. He never has to concern himself with ailing relatives because he lost touch with his birth family nearly a decade ago. I imagine he misses them, but any issues they might have aren’t his concern and won’t require his funding to save them.

He never freaks out about the safety of his state, country, home planet, or way of life. He never flinches at political discussions, never gets fed up enough to Mute or Block other dogs, and never discriminates among human kinds. To him all strangers were born equally guilty until proven friendly.

Whenever challenges approach his turf and try damaging his calm, his solution is always the same: bark at it for a minute till it retreats or disappears, then go back to what he was doing, which was either guard duty or one of his four daily naptimes or two bedtimes.

Dogs have twenty-seven words in their language for “I KILL YOU!” but zero words for “angst”, “overthinking”, “emo”, “emotional exhaustion”, “I’m leaving this site forever”, or “unfollow”. When a well-cared-for dog is asleep, their soft, soothing snores comprise a separate, subconscious vocabulary with complex phrases that resemble recognizable strings such as Hebrews 12:14 and Pharrell’s “Happy”. In their world, “resting doggie face” is the norm, not a one-time social media fixation.

This weekend, Lucky’s my role model. And as soon as he moves, I’m stealing some of those blankets back from him.