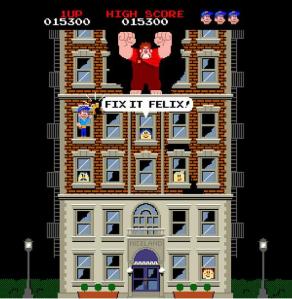 In this day and age where moviegoers can wait until the home-video release before watching a movie multiple times, how often are we willing to devote extra time and money to encore presentations of a theatrical release? The case agreeing to my second showing of Wreck-It Ralph tonight consisted of two winning bullet points:

1. My son and I really, really liked it the first time we saw it. This is the first year for new Pixar and Disney Animated releases in which we liked the Disney film better.

I had hoped to catch more details and Easter eggs this time around. Regretfully, I am old and the film’s background characters are spry. We managed to see a few items we missed the first time around: the other three Pac-Man ghosts; a mounted ostrich from Joust; the resemblance of the TurboTime cabinet design to that of Rally-X; and graffiti on a wall reading “Aerith Lives”. That list is too short. I’d also hoped to catch additional Easter eggs and overlooked scenes more to my liking, including but not limited to:

* The monsters from Rampage standing on a street corner outside the Niceland apartments, just staring and drooling.

* A traffic jam outside the terminal whose gridlocked commuters include the Moon Patrol rover, the OutRun Ferrari, an Armor Attack polygonal tank, an ExciteBike, and Nathan Drake in a Jeep. All sport the same license plate: “RIP G4”.

* A Grand Theft Auto thug being arrested by Mappy.

* A terminal convenience shop run by a Moogle and selling movies on DVD with titles such as Citizen Liu Kang, Disney’s Knights of the Old Republic, Wolfenstein 3D in 3D, and Galaga vs. Gyruss.

* A sidekick barbershop quartet with Clank, Daxter, Sparx, and Luigi.

* Pac-Man throwing a fit at Felix’s party because all the snacks are fruits, and for decades he’s been dying to have just one lousy steak.

* An inter-game prison populated with Leisure-Suit Larry, PaRappa the Rapper, and E.T. the Extra-Terrestrial.

* A political-activist poster advocating a unilateral ban on all Minesweeper mines.

…but I guess that’s what cutting room floors are for. Those, and the dreams of over-the-hill gamers who can imagine a film with three times the budget and none of the legal hassles.